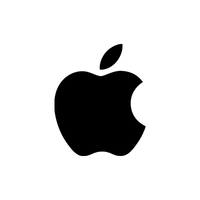 Apple Inc., formerly Apple Computer, Inc., is an American multinational corporation headquartered in Cupertino, California that designs, develops, and sells consumer electronics, computer software and personal computers. Its best-known hardware products are the Mac line of computers, the iPod music player, the iPhone smartphone, and the iPad tablet computer. Its software includes the OS X and iOS operating systems, the iTunes media browser, the Safari web browser, and the iLife and iWork creativity and production suites. The company was founded on April 1, 1976, and incorporated as Apple Computer, Inc. on January 3, 1977. The word "Computer" was removed from its name on January 9, 2007, reflecting its shifted focus towards consumer electronics after the introduction of the iPhone.

Apple is the world's second-largest information technology company by revenue after Samsung Electronics, and the world's third-largest mobile phone maker after Samsung and Nokia. Fortune magazine named Apple the most admired company in the United States in 2008, and in the world from 2008 to 2012. However, the company has received criticism for its contractors' labor practices, and for Apple's own environmental and business practices.

As of November 2012, Apple maintains 394 retail stores in fourteen countries as well as the online Apple Store and iTunes Store. It is the second-largest publicly traded corporation in the world by market capitalization, with an estimated value of US$414 billion as of January 2013. As of September 29, 2012, the company had 72,800 permanent full-time employees and 3,300 temporary full-time employees worldwide. Its worldwide annual revenue in 2012 totalled $156 billion. In May 2013, Apple had made it to the top ten of the Fortune 500 list of companies for the first time, taking the 6 position, 11 places up from the previous year.